Eggplant jerky is a healthy & yummy snack and a great way to use extra eggplants from your garden! And, yes, it actually tastes like real jerky!

Jerky… Made from eggplant…That tastes like the real deal.

Go ahead and be skeptical. I was too! But once you taste it… O-M-Goodness! You will be a believer too!

Eggplant is a totally awesome veggie: it’s very versatile and it absorbs flavors so well! Which means you can marinate it and make it taste like something completely different. When it’s dehydrated, the texture becomes firm and slightly chewy, just like traditional jerky. 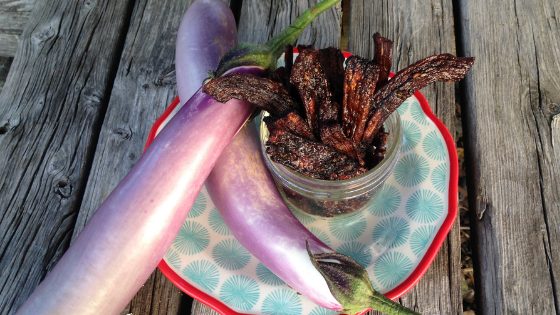 A little background on growing eggplants…

If you have never grown eggplants, there’s a few basics you should know. Eggplants are a nightshade, which means they are susceptible to the same diseases, funguses and illnesses as peppers and tomatoes. For this reason, it’s best to rotate your planting location each year to help decrease the chance of building up fungal diseases in the soil. You can give seedlings a boost by fertilizing when you plant them (just remember that a fertilizer high in nitrogen can burn young plants). I plant mine in well-composted beds and  fertilize with a mix of a 3-3-3 natural fertilizer, kelp meal, ground eggshells, and epsom salts.  I also give them a boost during the mid-season summer heat with a homemade compost tea. I highly recommend the ping tung variety of eggplant. It’s a prolific producer that is hardy in most growing zones. It only takes about 70 days to start producing, which means it will produce throughout most of the season. It produces beautiful purple eggplants that are about 8-10 inches long. The shape is perfect for jerky! The skin of a ping tung eggplant is also much more tender than the Italian eggplant (the variety most commonly carried in grocery stores).

I just finished harvesting the rest of our eggplants after we were hit with a frost. Eggplants are most tender when picked young. But let’s face it – it’s the end of the gardening season and I’m tired. So I *may* have forgotten about them for most of September. Oops.  But here’s the good news: those overripe eggplants may not be ideal for eggplant parm, but they are perfect for jerky! Which is easier to make anyways. It’s a win-win, really. 😉 When it comes to making eggplant jerky, it’s all about the seasoning! This is one of those mix-n-match recipes, so have fun with the marinade recipe! Try different spice combinations and see what you like! I’ve listed a basic “classic jerky” recipe below, but here are some other ideas:

Before we get to the recipe, I would like to point out how hard it is to make jerky look appealing in photos. It just isn’t one of those foods that photographs well. So, just use your imagination and think about all that savory goodness!

How to Make Eggplant Jerky

If you like it then you better put a pin on it! Just in time!! My eggplants are going nuts. Can’t wait to try it!

I hope you enjoy it as much as we do!

Want to really try this recipe. Looks yummy. How would you store this and how long will it keep?

Hi Cici! Truthfully, it never lasts long in our house because it gets eaten so quickly! But you can store it in an airtight container or bag and it will last at least a month if not more. :)