Behind the Scenes: January 2019 – A quick recap of some of the homestead happenings that occurred on the Zenstead in January!

What we worked on:

Why is January such a long month?! It felt like a whole year just rolled into one month! But it allowed us to get a lot done. And luckily, we weren’t stuck in a polar vortex like a lot of Americans!

We did a self-imposed “No Spend Month Challenge” in January because, well, we just didn’t have much income! We aren’t crazy spenders, but we’re just more careful and aware of how we are utilizing our resources during a No Spend Month. It’s actually a really fun challenge because it forces you to get creative with your homestead projects. And I’m super thrilled with how much we accomplished in January without spending hardly any money! 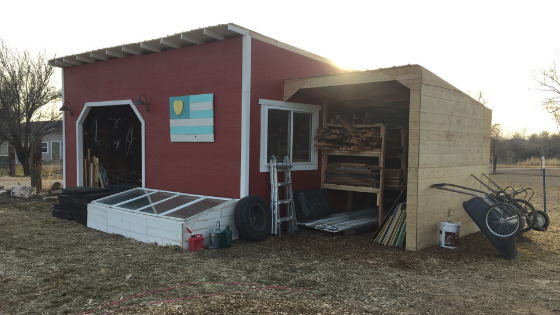 Our biggest accomplishment for the month was building a new addition onto our barn to hold our stock-pile of supplies. We are constantly scouring our local Craigslist for usable supplies to keep on hand for projects. But things were getting a bit messy.

And then Lindy found another major Craigslist score! She was able to get an entire truckload of free wood scraps from a construction site just down the road. So, after receiving the truckload of wood, we really needed a new storage area for our supplies! The new addition to the barn is now packed to the brim with wood and other supplies, waiting to be turned into new homestead projects! And everything is so nicely organized now – we know exactly what we have on hand and can easily access it! Best of all, the barn addition was built entirely using supplies we had on hand, with the exception of 5 sheets of siding that we had to purchase. But since we were doing a “No Spend Month” we got creative in funding that purchase! I found out that our bank offers reward credits (I had no idea all these years!) and we had enough rewards to cash out for a $50 Lowe’s gift card. And we hustled the rest of the money by doing odd jobs (more on that here)! Some other ways we saved money in January: We pretty much suck at composting. I honestly feel like people over-think it. I mean it’s just rotting things. How hard can it be? Eventually, things will break down because that’s just how nature works. Buuuut, that being said, things will certainly break down faster if the process is done correctly!

The key components necessary for proper composting are heat, moisture, oxygen, carbon and nitrogen. Nitrogen is introduced by “green” or moist material like food scraps, fresh lawn and plant clippings, urine and manure. Carbon is introduced through “brown” or dry material like hay, dried leaves and twigs. The proper ratio of browns (carbon) to greens (nitrogen) is 2/3 browns and 1/3 greens. And the ideal size for a compost pile is 3’x3’x3’. Basically, we were being super lazy and breaking aaaaaaall these rules. So, in an attempt to improve our composting, we built new bins! The bins are smaller than our previous giant pile, which will help things break down faster. They are made form three pallets screwed together and we placed branches in the bottom to help with oxygen and airflow. I’ve been watering the piles to keep them moist and trying to be better about our green to brown ratio… which is hard in the winter. But things are starting to heat up and break down better! Funny how things actually work when you do them correctly ?

We don’t have a TV but we do have a “borrowed” Netflix account. We usually just watch The Office, season after season and then start back at season 1 again… BUT we found this show called Big Dreams, Small Spaces. It’s a British show and I’m absolutely hooked! Thee show is about people who have big ambitions to create gardens of all kinds in small spaces with the help of Monty Don (who is apparently a famous British gardener). It’s gorgeous, heartwarming and inspiring! And between my love for this show and my crazy amount of Royal Family knowledge, I’m now convinced that we need to move to the English countryside when we retire. ?